“Your baby now weighs about three-quarters of a pound and is approximately 10 1/2 inches long — the length of a carrot. You may soon feel like she’s practicing martial arts as her initial fluttering movements turn into full-fledged kicks and nudges. You may also discover a pattern to her activity as you get to know her better. In other developments, your baby’s eyebrows and lids are present now, and if you’re having a girl, her vagina has begun to form as well.” [From BabyCenter.com] 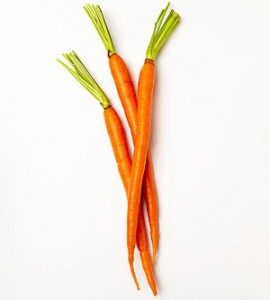 But according to TheBump.com, she’s the size of a pomegranate. 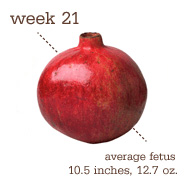 If you ask me, the fruit and veggie comparisons seem to be out of whack. First of all, I don’t think I’ve ever seen a 10.5 inch pomegranate. Seriously, pull out a ruler or measuring tape and try to imagine a pomegranate that big! Secondly, I don’t actually think she’s 10.5 inches long yet. I had another ultrasound today so they could try to get the few images they weren’t able to successfully get last time (by the way, we got the all clear – she looks great!) and the pictures the tech gave me indicate she is 18.2cm, which converts to 7.2 inches. We’ve been told before that the measurements they take during the ultrasound can be off a little, but I doubt it’s off by 3 inches. So all I can say for certain is that this is what she actually looked like today, all folded up on herself and moving around quite a bit. It looks like she’s practically kissing her knees! And don’t worry, she has feet. And arms. They’re just not captured in the image. 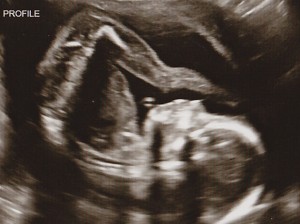 And this is what she supposedly looks like, if you could see her more realistically and less granularly (not sure that’s a word, but it’s my blog so I’m going with it). Except that the tech said her head and feet were down, not up. 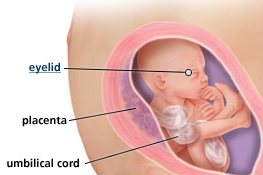 My favorite moment of the day was finally getting to see AND feel her! It was always such a strange disconnect to be able to see her moving around during an ultrasound and know it was happening inside me, but not be able to feel a thing. She’s definitely a mover though. And I love, love, love feeling her move around!