…baby! And a stubborn one, at that! The evasive maneuvers this one was pulling to avoid being documented were impressive and pretty funny. Until we were nearly 45 minutes into the ultrasound, and my full bladder had been kneaded like a ball of dough for at least half that time, and it was really looking like we were going to have to come back another day. Then it wasn’t quite as funny. But they (the ultrasound tech, doc, and student doc) changed tactics and managed to get much better views and tell us that our baby is…a girl! And she looks strong and healthy and has a gorgeous heart (they kept saying that and taking more pictures of her heart, which just made me smile and laugh a lot). Honestly, Zakk and I are both kind of in shock right now. Some people really know they want a boy or a girl. We both just wanted a healthy baby. Or so we thought. When they told us our baby is a girl, the disbelief both of us felt made us realize we had both been thinking it was a boy. In fact, my initial response was a wide-eyed, “Oh boy, a girl…”, which the ultrasound tech thought was hilarious and yet I didn’t even notice my pun. But we’re warming up to the idea already. And our mothers are both thrilled. They say they knew it was a girl. And Zakk’s sister, Emma. She knew, too. I say they had a 50/50 chance of being right and they got lucky. But there’s nothing wrong with that.

“Zakk, we’re having a daughter…” 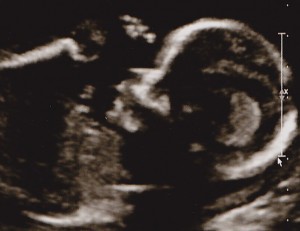