It’s hard to believe it’s already been two weeks since little Colette joined us on the outside! I’ve been hoping to write up her birth story every day since it happened, but life with a newborn doesn’t often allow for you to keep up with your To Do lists. I’ve finally managed to get it all written out and would like to share it with you. I give you fair warning, this is a birth story so there is talk of lady parts and birth related things that some of you may not want to read. I think I’ve written it in a fairly innocuous way, but I just wanted to give you a heads up in case that kind of thing makes you squirm.

Her birth story begins on Thursday, June 27th when we went in for our regularly scheduled appointment with our midwife group. The midwife we saw that day told us that our baby girl was still in the same position she had been in for several weeks (head down, back on the right side of my belly, feet on the left side of my belly, butt sticking up). So she checked my cervix and found I was dilated nearly 2cm, and the cervix was soft and front-facing. This was all good news that meant my body was gearing up for birth and so she was able to go ahead and sweep my membranes (which basically means separate the membranes of the amniotic sac surrounding the baby from my cervix in order to release prostaglandin hormones which may kick-start labor).

Then Zakk and I went to our appointment for fetal monitoring to make sure the baby was doing well and my amniotic fluid levels were good. The baby was a superstar and moved around plenty while keeping her heart rate in the ideal range. I had 3 contractions, but they weren’t strong. All seemed well. 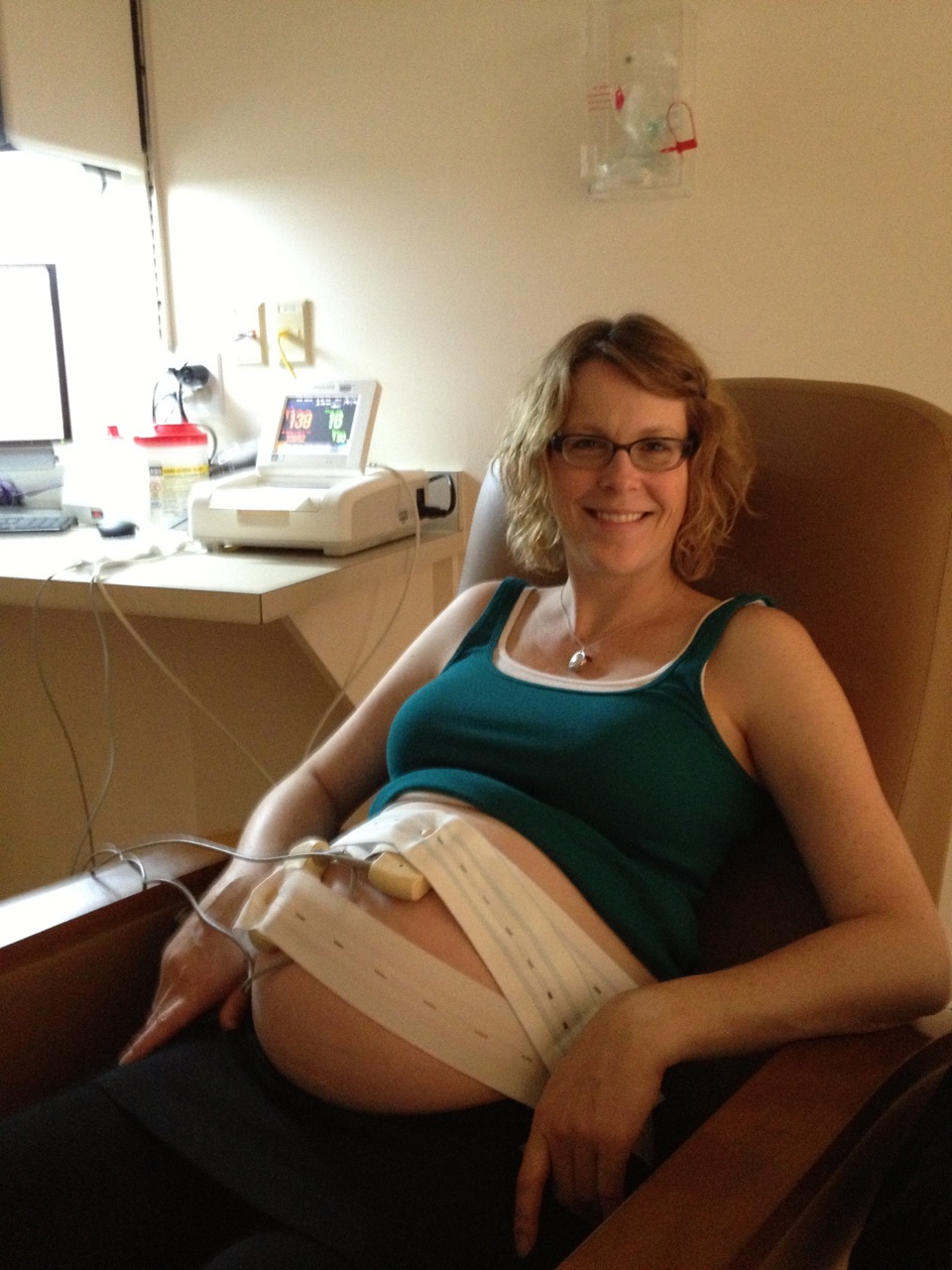 Then the nurse did the ultrasound to check the amniotic fluid levels and she found the baby’s head up near my ribs rather than down in my pelvis and told us the baby was breech. I tried to correct her and explain that the baby was head down and butt up. As if I could make it so just by saying it. Ha! She showed us the eyes and proved it was indeed the head we were looking at and not her bum. Yep, apparently our daughter is a total butthead! We consulted with the on-call midwife and an OB and were presented with our options. Which there were a lot of. And the choices weren’t easy. But through all the tears, fears, and frustrations that Thursday brought, Zakk was my rock.

That evening, we tried several natural ways to get her to turn around, including playing music down low near my pelvic bones and moxibustion (you can Google that one…it burns). Friday morning, we tried moxibustion again and then I had acupuncture at 8am. These things might have worked if I hadn’t already been 39 weeks and 2 days along. They are normally tried beginning around 37 weeks and take a few attempts before successfully turning a breech baby, but they do have a good reputation for working and we wanted to try everything we could before moving on to more aggressive measures. 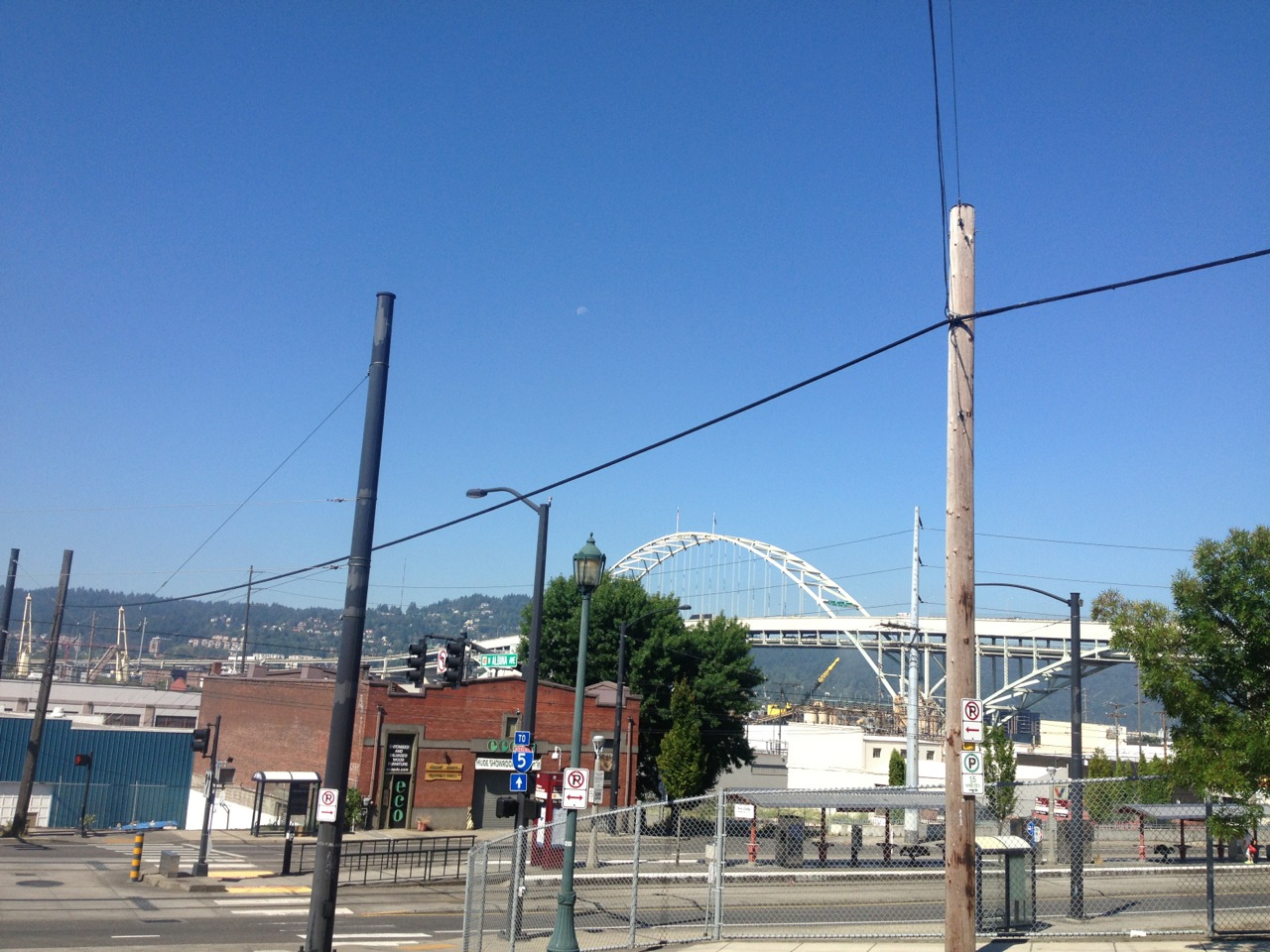 The morning of Colette’s birthday.

At 11am, we met with one of only six docs at OHSU (Oregon Health & Science University – a well-renowned health and research university where we had been receiving our prenatal and midwifery care and would be having our baby) who will perform a vaginal breech delivery to find out if our baby girl and I were good candidates for that. Turns out we were decent candidates, but the risks involved and the likelihood that I would end up having a C-section anyway were too high for our comfort and so we decided to forego this option.

We had an appointment at 1pm to try something called external cephalic version (usually just called version). This is manual manipulation to try to get the baby to turn head down and out of breech position and it has about a 50% success rate. I kept hearing from staff that the version was a good option and they or someone they knew had successfully gotten their baby to turn through this procedure, so I was feeling kind of optimistic. I would have spinal anesthesia for this procedure because it helps relax the mom’s muscles and usually makes the turning procedure more successful and they would perform it in the OR so they could monitor my vitals (primarily due to the anesthesia) and our baby girl’s vitals. If it worked and baby girl was no longer breech, we could either go home and wait for labor to start or stick around and be induced. If it didn’t work and she stayed breech, we had two possible scenarios. The first option was that we could go home and come back another day to try the version procedure again, but that would mean getting spinal anesthesia again (which carries its own risks) and the fairly dangerous possibility that I would go into labor naturally with our baby still in the breech position. The other option was to stick around and have a c-section. After a lot of deliberation, tears, soul-searching, and frustration over not getting to have the natural labor and delivery we had been hoping and preparing for, Zakk and I decided that if the version didn’t work, then the best and safest option for both me and our baby would be to have the c-section while I was already in the OR, under anesthesia, and I had not yet gone into labor. 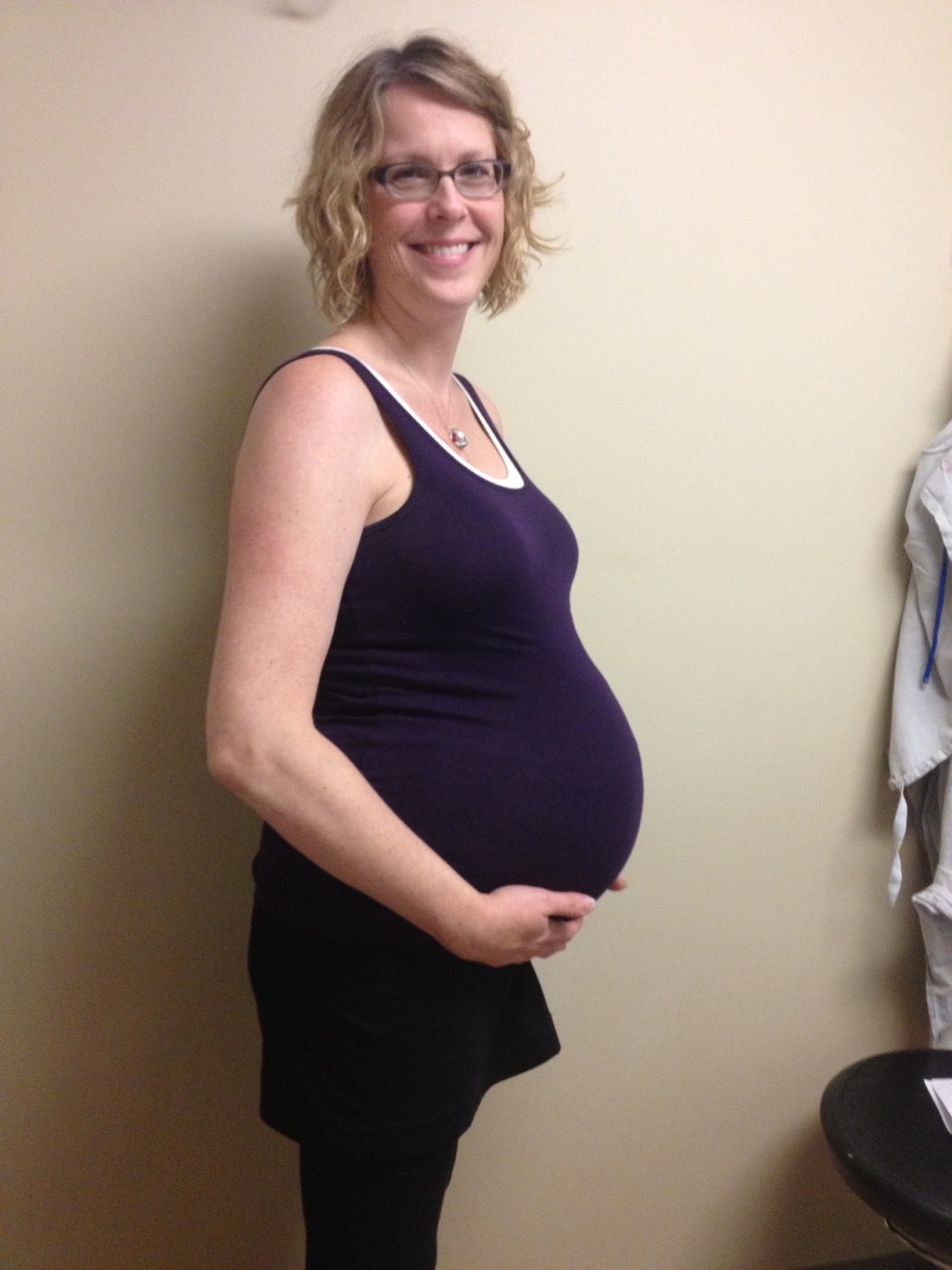 As big as I was going to get with this little one!

We waited from 1pm until 7pm in a tiny little triage room where they typically monitor women in labor before assigning them to a birthing room. I hadn’t eaten since 8:30pm the day before – doctor’s orders since I was going to undergo the version procedure with anesthesia. Needless to say, I was tired, punchy, and getting a bit stir-crazy in there. But that only made Zakk’s jokes a whole lot funnier to me. So we laughed a lot and tried to be patient. We looked through the Nametrix app and talked about name ideas for our daughter, laughing until we cried about all the awful possibilities out there, including Melba (of course, anyone with that first name would have to have Toast as a middle name), Merlin (the wizard), Refugia, and Unique. These were a whole lot funnier in the state of mind and body I had going on that afternoon. I promise. 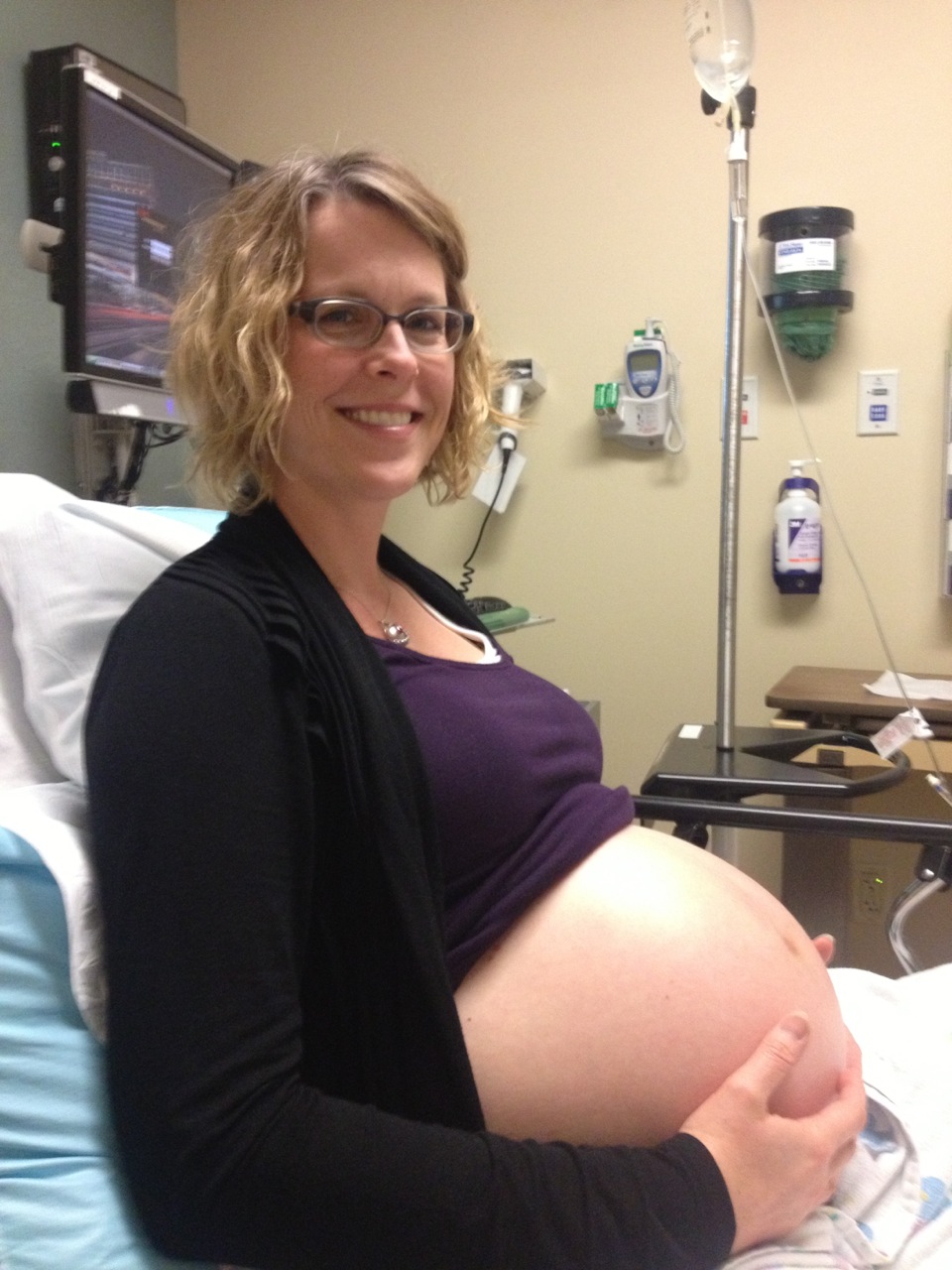 Waiting patiently for things to begin. 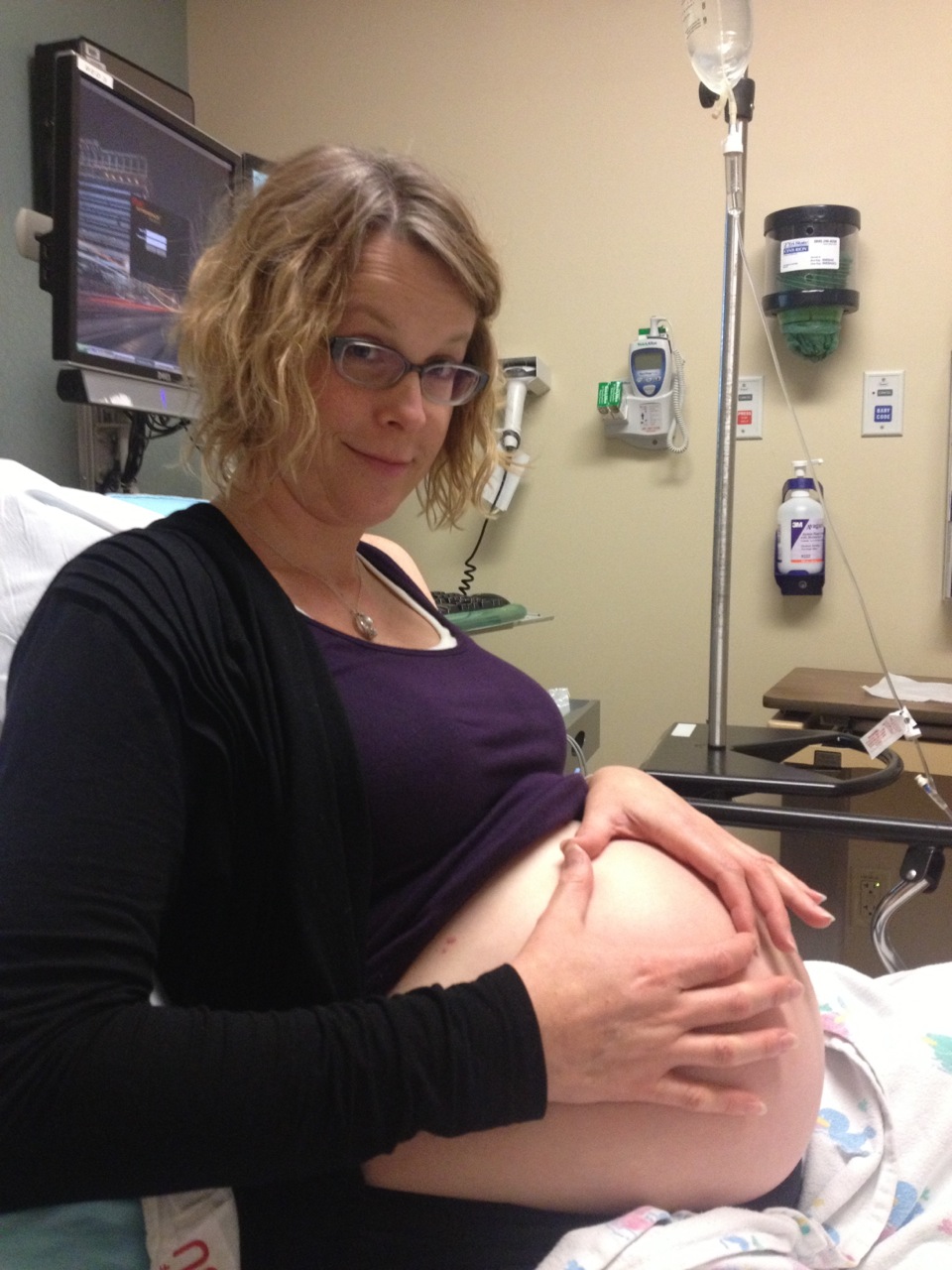 At 7pm, they said the OR was finally free and the team was ready for me. I gowned up, made Zakk take a picture of me (in case it was the last pregnant picture I would get!), and headed down the hall to get numbed up. 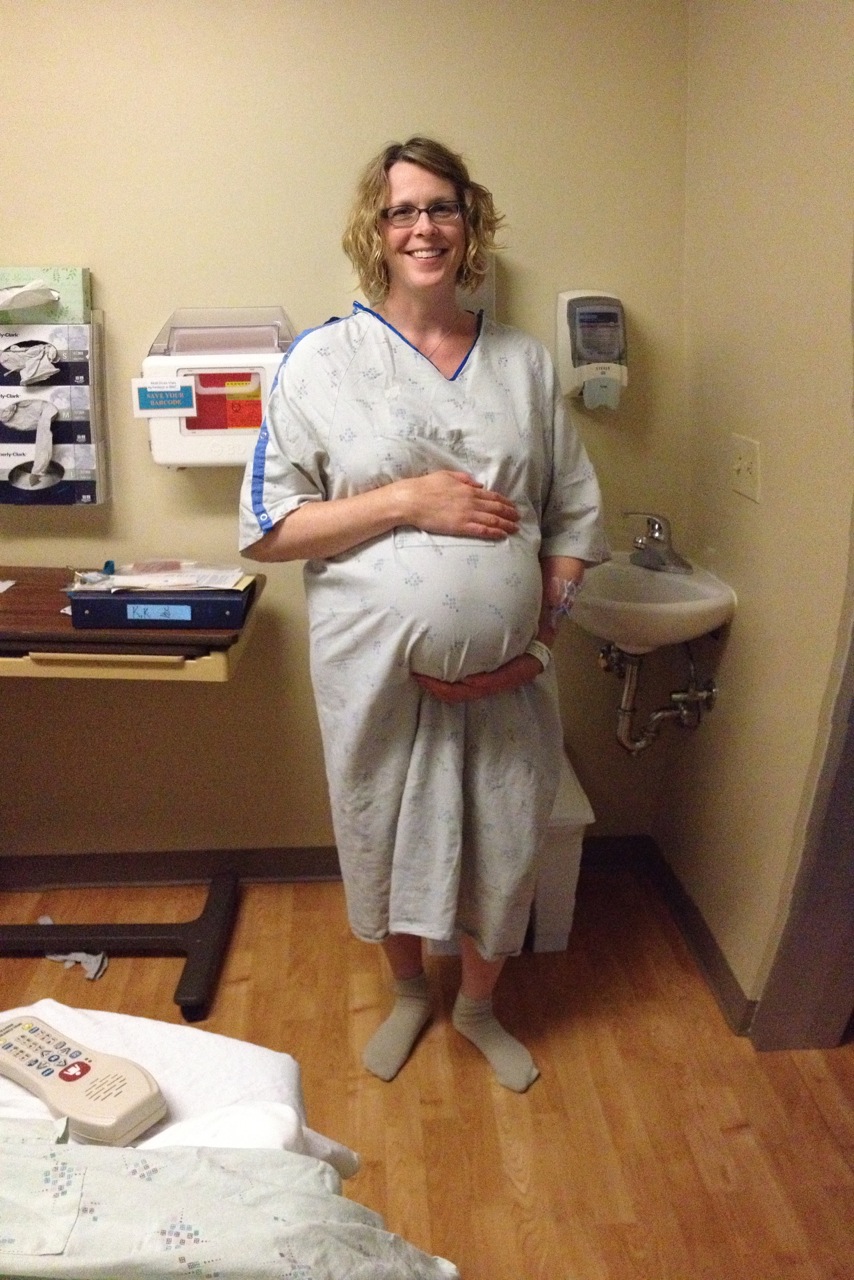 Zakk joined me in the OR around 7:30pm (he wasn’t allowed to come in until they had administered the anesthesia) and the version began. They lubed up my belly with mineral oil and started trying to force baby girl to spin around so her head would be down by my pelvis. I really couldn’t feel anything more than the gentlest touch (run your hand down your arm and you’ll have an idea of what I was feeling), but Zakk says it looked like it would have been excruciatingly painful without anesthesia because there were at least two different docs aggressively digging into my abdomen with their hands and elbows. It was definitely surreal to hear him say that while I was only feeling gentle pressure.

After a couple minutes of trying to turn her, they stopped to check the baby’s position and heart rate. It wasn’t good news. Not only was she stubbornly not turning, but her heart rate was dropping to a dangerous point. They told me they needed to move on to an emergency c-section and get her out right away and that there was a chance I would need to have general anesthesia (in other words, I would be completely out) if it looked like the spinal anesthesia would wear off before they could complete the surgery. I panicked and burst into tears. Up until that point, I had been calm, joking and talking with the staff and Zakk, and waiting to hear the good news that the version had worked. But when they said it had failed and my baby was in danger, I just lost it. I was so scared, both for her and for me. But the staff was amazing and they continually reassured me that everything would be find and they would have her out in no time. Zakk was right next to me the whole time, holding my hand and calming me down.

The OR team moved very quickly to convert the procedure from a version to a c-section and they had her out in about eight minutes. In those eight minutes, I calmed down (a bit) and was no longer bawling, but was completely on edge waiting to hear the cries of life that would let me know she was okay. When they said she was out and I didn’t hear her right away, I started to panic again. But then the sweet sound of her newborn screams filled the air and I cried with joyful relief.

I urged Zakk to go be with her while they cleaned her up and quickly checked her out. One of the anesthesiologists went over and took pictures of her on his phone and brought them back to me so I could see them as I lay unable to move my body from the middle of my chest down to my toes and they continued working on me. I cried and cried, but these were happy tears. I was so overwhelmed with gratitude that my baby girl was okay! 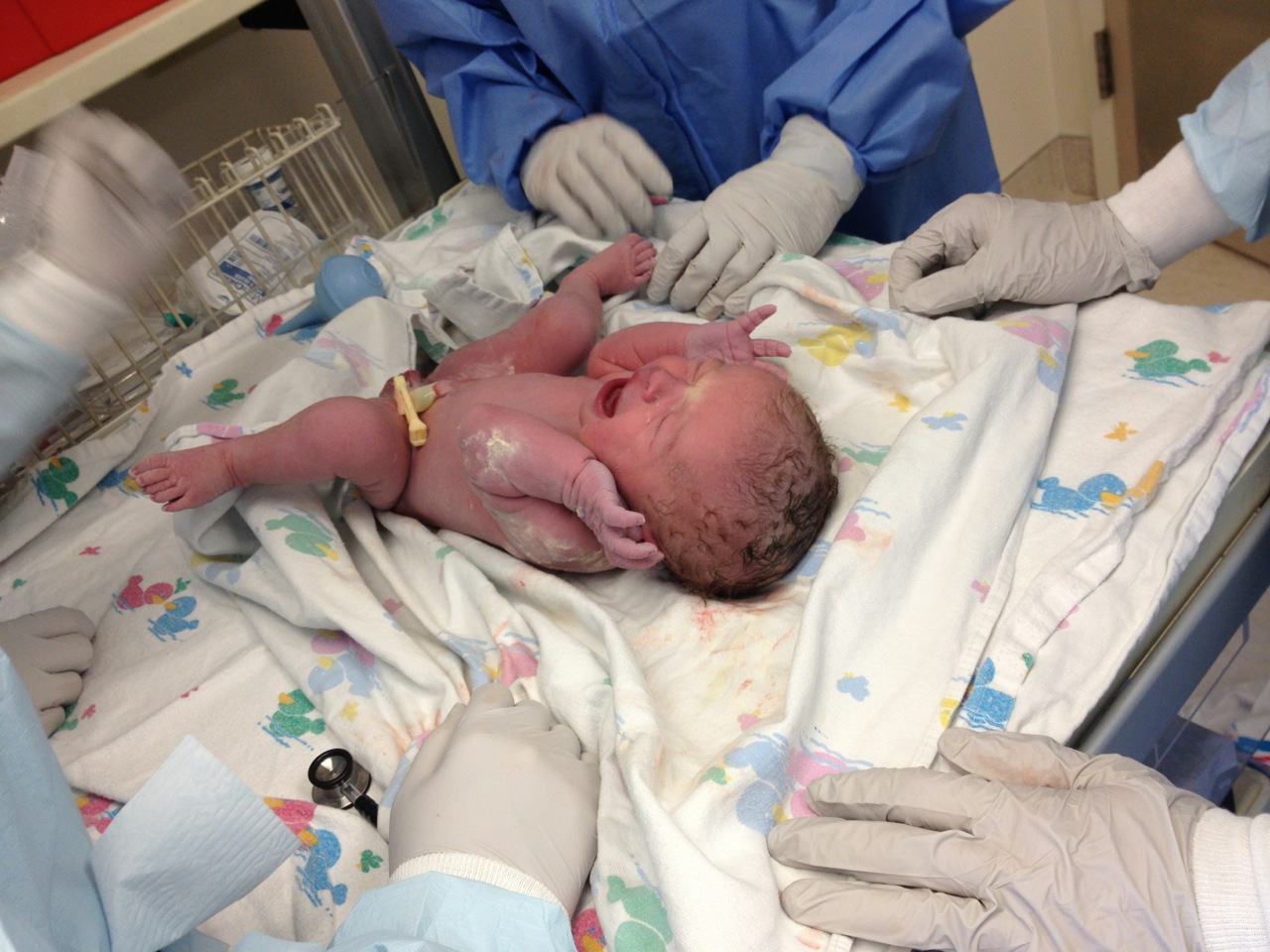 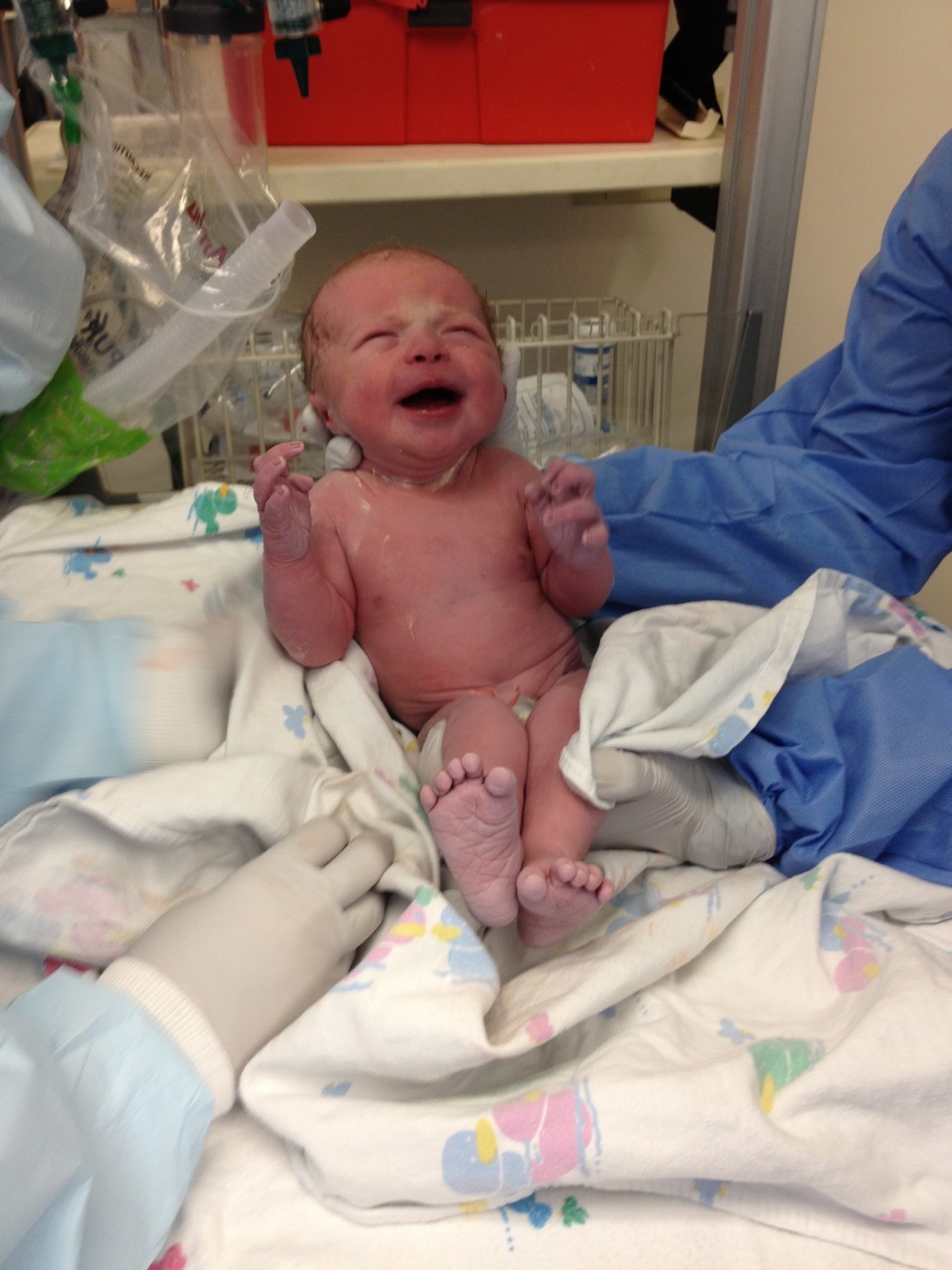 A couple of minutes passed and then Zakk brought her over to meet her mama. She was swaddled and resting peacefully in her daddy’s arms. 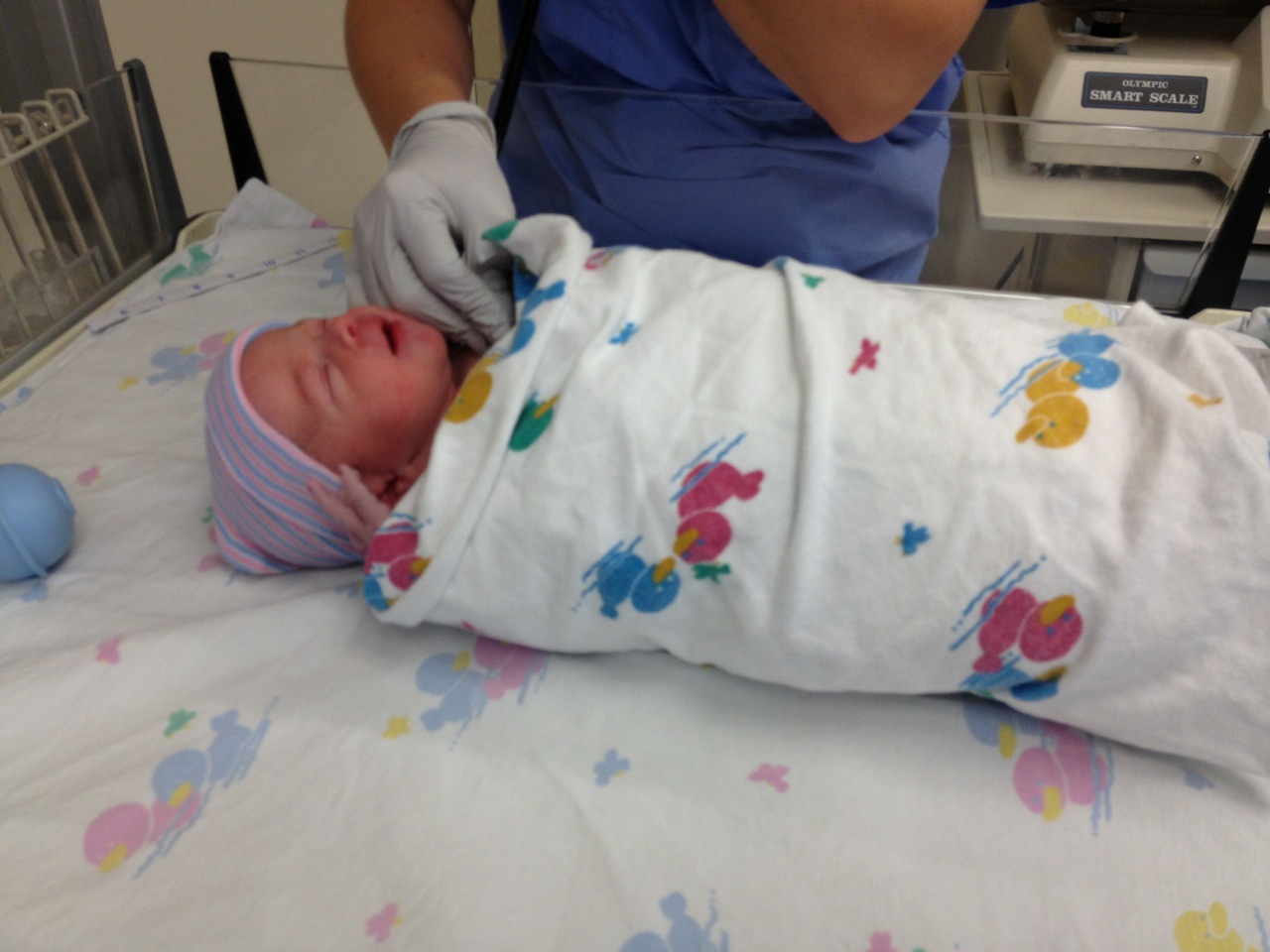 Swaddled and ready for Dad.

Although I could only really move my arms and head, I was able to see her and to hold her tiny little hand. Now that I knew she was safe, I became kind of obsessed with getting her some skin-to-skin contact and finding out when she could start breastfeeding, as these had always been the very first things that were to happen with her when she was born. They are so very good for a newborn and I didn’t want my daughter to lose out on the benefits of these things just because I was still having surgery. Unfortunately, he couldn’t provide skin-to-skin contact with her in the OR, but he did eventually did take her across the hall to the recovery room and put her on his bare chest, where he says she nuzzled in quite snugly and began bonding with her daddy. Obviously, he wasn’t able to breastfeed her, so that had to wait until I was out of surgery and with them in the recovery room. But it did happen and she latched right on and it was so sweet and lovely. 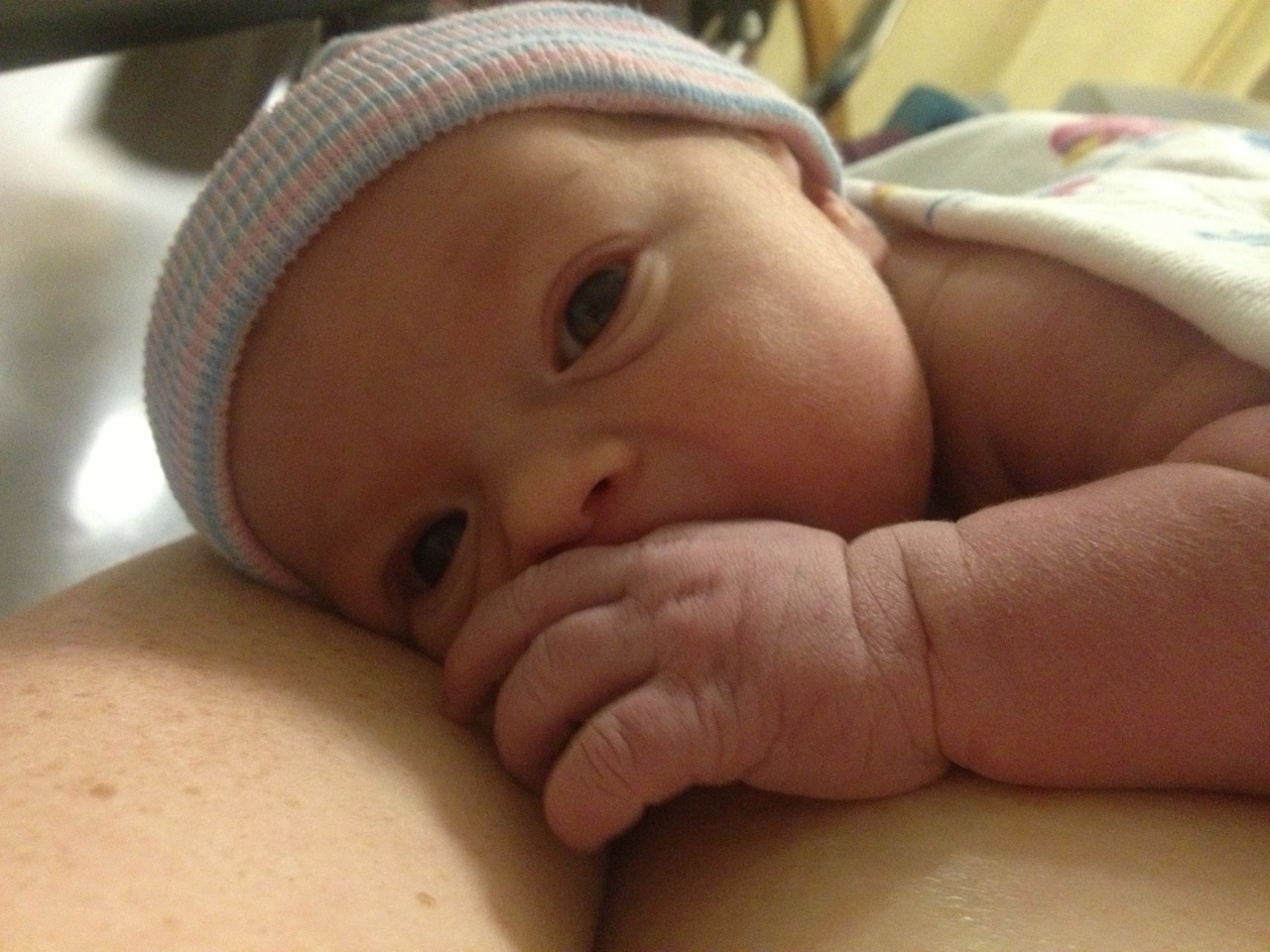 Gazing at each other. 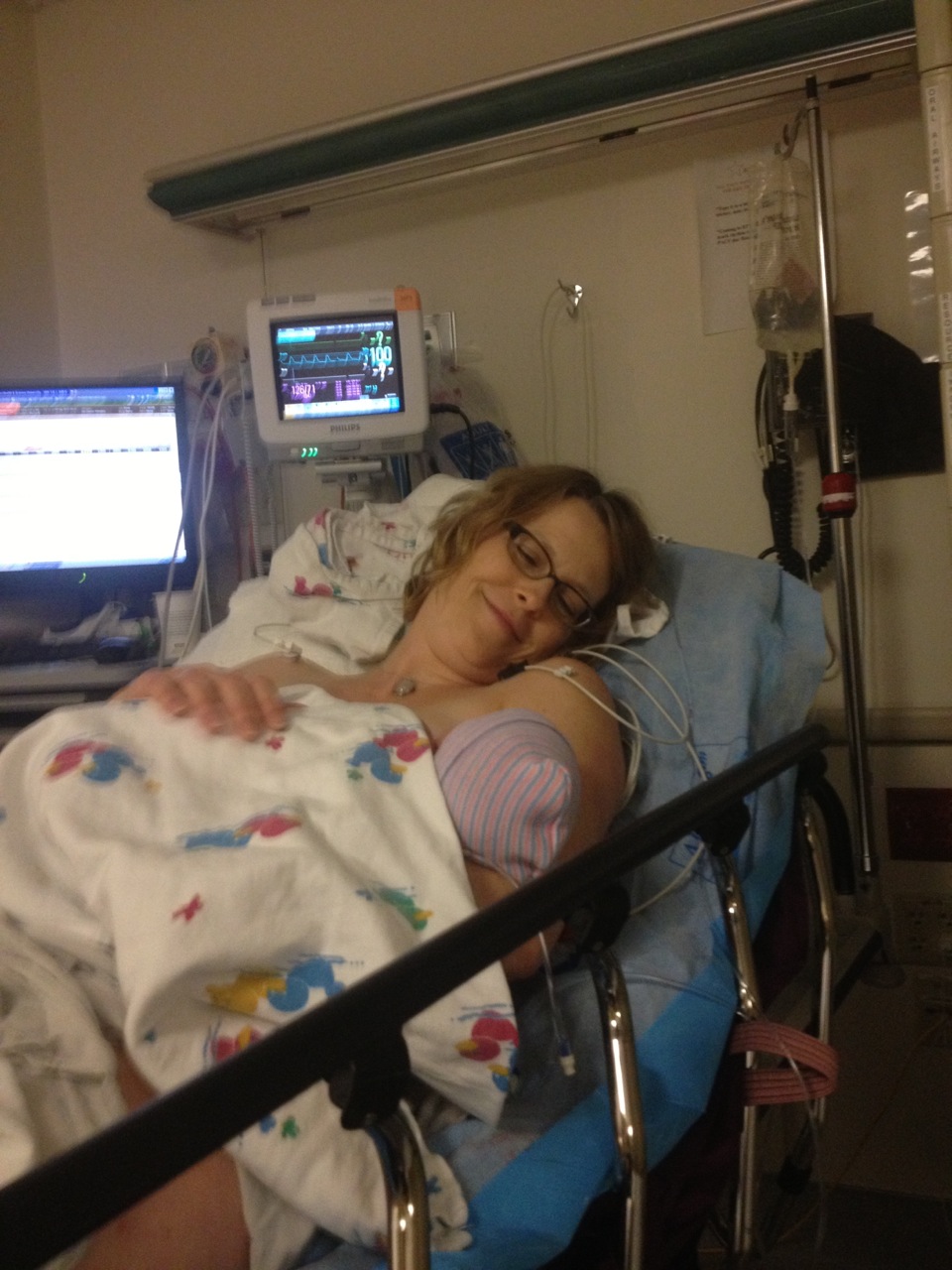 So that’s the story of how Colette Rocket Kuzda made her way into this world. She is perfect and amazing and she makes us laugh and love harder than we would have thought possible! Zakk and I have really been enjoying parenthood so far and are very grateful for the time the three of us can be home together to get to know each other. She is such a joy!

Next up, we’ll answer the question, “How did you come up with her name?” We know you’re all dying to find out!