Sunday started out quite nicely. We had a good morning at home and then went out to have lunch with our dear friends Alex, Dani, Felix, and Archer at a new pizza place. The food was delicious, the company was even better, and we all enjoyed a nice couple of hours hanging out together. Then we went home and Rocket napped in my arms. She woke up hungry, I fed her, and then she pooped. So I called Zakk up from the basement and told him his daughter had a present for him. And it was a doozy. He changed her and stood her up on the changing table, at which point she proceeded to puke all over him and herself. Now, this was not a normal spit-up. This was projectile vomiting. And it was disgusting. And a little scary. And quite surprising. She had seemed totally fine up until she ejected the milk, prunes, and oatmeal that were in her tummy. She was in decent spirits, if a little bewildered, and we thought she was done, so we moved her to the bathtub. And then she puked some more. And then some more. We did our best to clean her up, but she kept throwing up more. So Zakk wrapped her in a towel and she cuddled into her Daddy’s arms. He held her while she alternately rested and vomited. I called her pediatrician and got some advice. She said to watch her for awhile to see if she improved and gave me an opportunity to feed her, but not to wait too long before taking her to the ER because a baby her age can dehydrate easily. I felt helpless, so I cleaned. After nearly two hours, she was still throwing up, she was very lethargic, and we knew it was time to call in reinforcements. So off we went to the ER of the nearby children’s hospital. They gave her an anti-nausea pill and then we started feeding her tiny amounts of pedialyte. 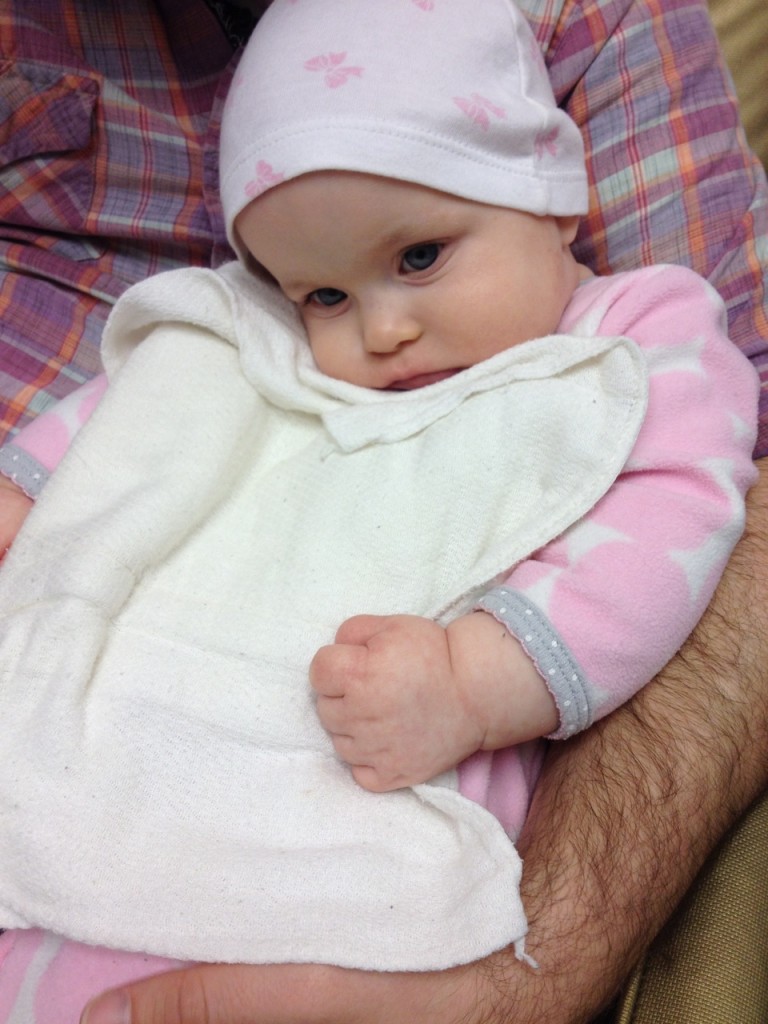 She stopped vomiting, but had a massive diarrhea. I can’t even tell you how weird this diaper was. But the ER doc said it was just the virus working its way through her system. We kept giving her the pedialyte and she kept it all down and seemed ever so slightly less lethargic than when we arrived, so we were sent home after a couple of hours with a very sleepy, but no longer pukey, baby. It was a long night of short bursts of sleep for me and then fighting to stay awake so I could breastfeed her for 2 minutes so as not to overwhelm her tummy, wait 20 minutes, feed her for another 2 minutes, wait another 20 minutes, feed her for another 20 minutes, and then rest for a couple of hours. By about 7:30am Monday morning, she was able to give us a smile. And she kept getting progressively better from there. There were still a few more poo explosions, but she was laughing, playing, and acting like herself again by the afternoon.

It was scary, sad, and exhausting. I have never seen my baby girl so lifeless as after she had been throwing up for a few hours. She felt like a rag doll in my arms. But we all survived. And she is better now. And I hope we don’t have to go through that ever again. Or at least not for a long time. But preferably never.