Finally, the answer to the much asked question, “How did you come up with her name?”

It all started with a delirious, giggly, late night conversation between me and Zakk. We were using an app on my iPhone to consider names for our soon to be born daughter and we weren’t taking ourselves very seriously. Zakk suggested the name Pepper. I turned it down. Although I think it’s cute, my friend and former coworker Alex told me I had to pick a name that would be appropriate if she someday became a doctor. He said that I would go to see her at work one day and they would need to page her and so it would have to sound good over the intercom. “Paging Dr. Pepper…” just made me laugh. I couldn’t take a doctor called Dr. Pepper seriously! Zakk and I were both laughing pretty hard at this point (remember I said we were delirious and it was late…). Then Zakk suggested we name her after another of our favorite vegetables, Arugula. Again, I turned him down. No way were we going to name our daughter Arugula! Then he said, “What about Rocket? The British name for Arugula? That would be an awesome name! Rocket Kuzda…I’m going to change my name to Rocket Kuzda someday!” We laughed and laughed and I told him that I couldn’t name our daughter Rocket. I suggested that would be a great nickname for her, but there was no way that would be her legal name. He took to calling her Rocket from then on. And it was cute. I liked it and I liked that he had a special nickname for her.

Fast forward a few weeks to the day of her birth. We were waiting for hours and hours in the tiny room at the hospital for them to take me into the OR so they could try to turn her so her head was down and ready for birth. Again we became delirious and again we were discussing name ideas. We really still had no plan for what to call her. We laughed until we cried at the ridiculous names we were throwing out to each other: Melba (middle name Toast), Merlin (middle name The Wizard), Refugia, and Unique. Like I said, we were delirious! Plus, I hadn’t had anything to eat for almost 20 hours! Through all of this, Zakk kept trying for Rocket and I kept turning him down.

When our baby girl was born, the OR staff asked if we had a name picked out. I told them we only had a nickname. They all loved “Rocket” and thought it would be a great name, which only served to encourage Zakk’s insistence that we make that her legal name.

Over the next 36 hours or so, as we fell completely head-over-heels in love with our daughter, we both recognized that we needed to come up with a name for this amazing creature. Zakk made a proposal. I could pick her first name if he could pick her middle name. I was wary. Of course he would pick Rocket. Was this a good middle name for our sweet girl? He made his case: we had a great memory of our first discussion of it as a name possibility, she did arrive in this world with speed and drama, it’s a nod to his British heritage because it’s what they call Arugula, and it’s just so damn cool. “Plus,” he said, “middle names don’t matter.”

So I agreed to Rocket and then decided her first name would be Colette. It was a name that had long been on my list of possibilities. I love the sound of the name Colette paired with our last name of Kuzda. And I love that it sounds both sweet and distinctive. I don’t know anyone named Colette so I felt she would be able to make her own identity with the fairly uncommon name. Finally, it met Zakk’s request (from before we struck the first name by me/middle name by him deal) that her initials make a cool sound when pronounced (CRK = crook), just as his do (ZAK), mine do (KLK), his sister Emma’s do (EAK), and his sister Cassie’s do (CAK).

Interestingly, we found out after naming her that there is a Saint Colette. According to Wikipedia, “Due to a number of miraculous events claimed during her life, she is venerated as the patron saint of women seeking to conceive, expectant mothers and sick children.” How fitting!

So there you have it. The story of how this darling girl came to be known as Colette Rocket Kuzda. 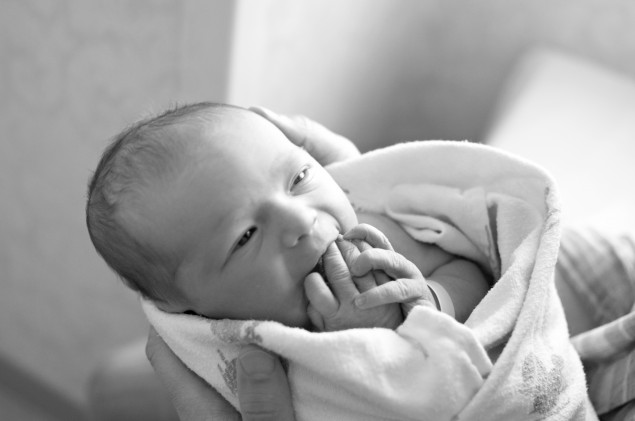