A couple weeks ago, we made a paper chain to count down the days until Colette started preschool. As the chain became shorter and shorter, Colette became more and more excited. This morning, she woke up and said, “Today is the day I go to my new school!” She got herself dressed, we ate breakfast, and then Mama and Daddy both walked her to New Farm Montessori for her first day. It was a bit misty on our walk there, but we were full of anticipation and smiles. 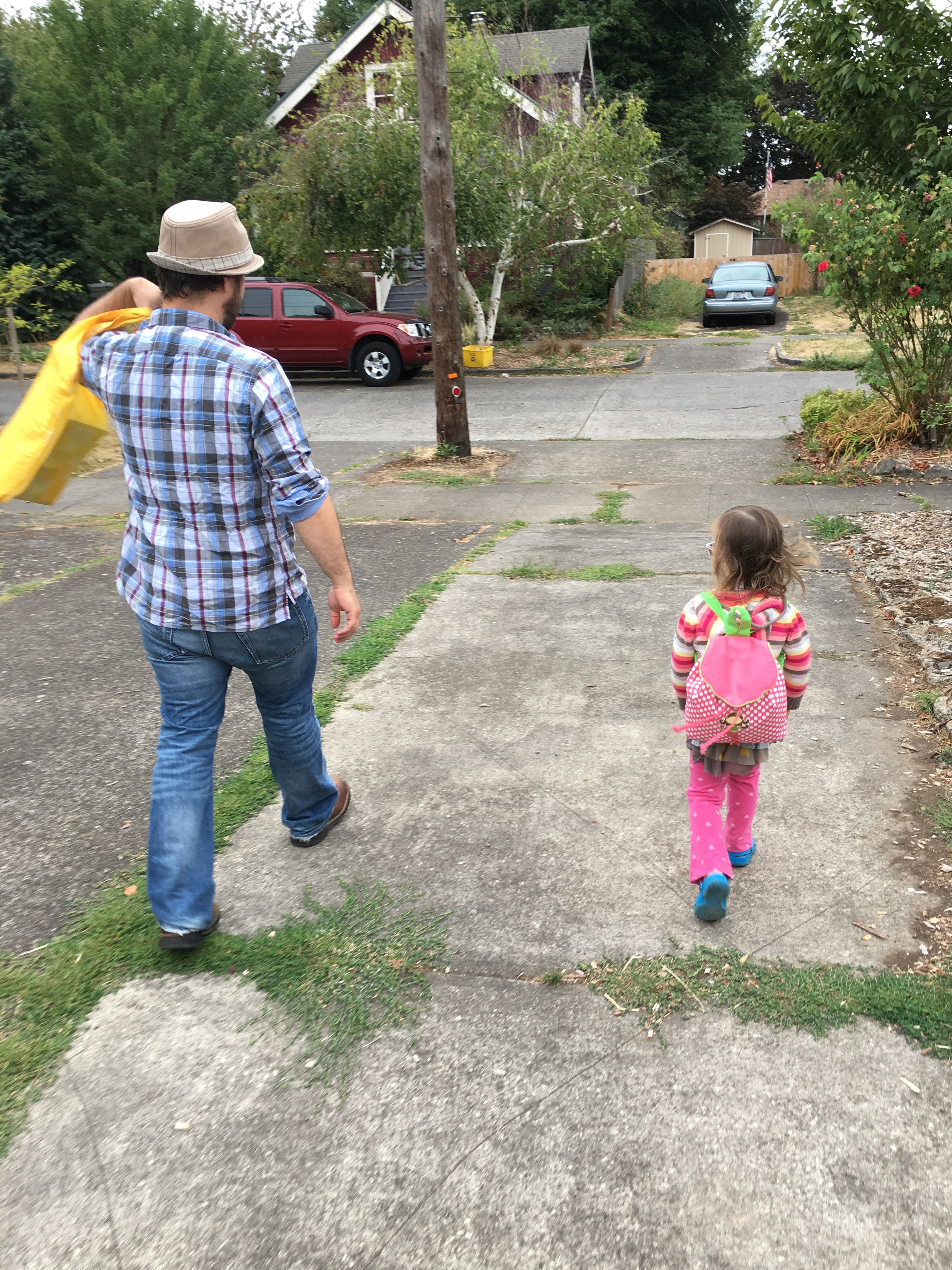 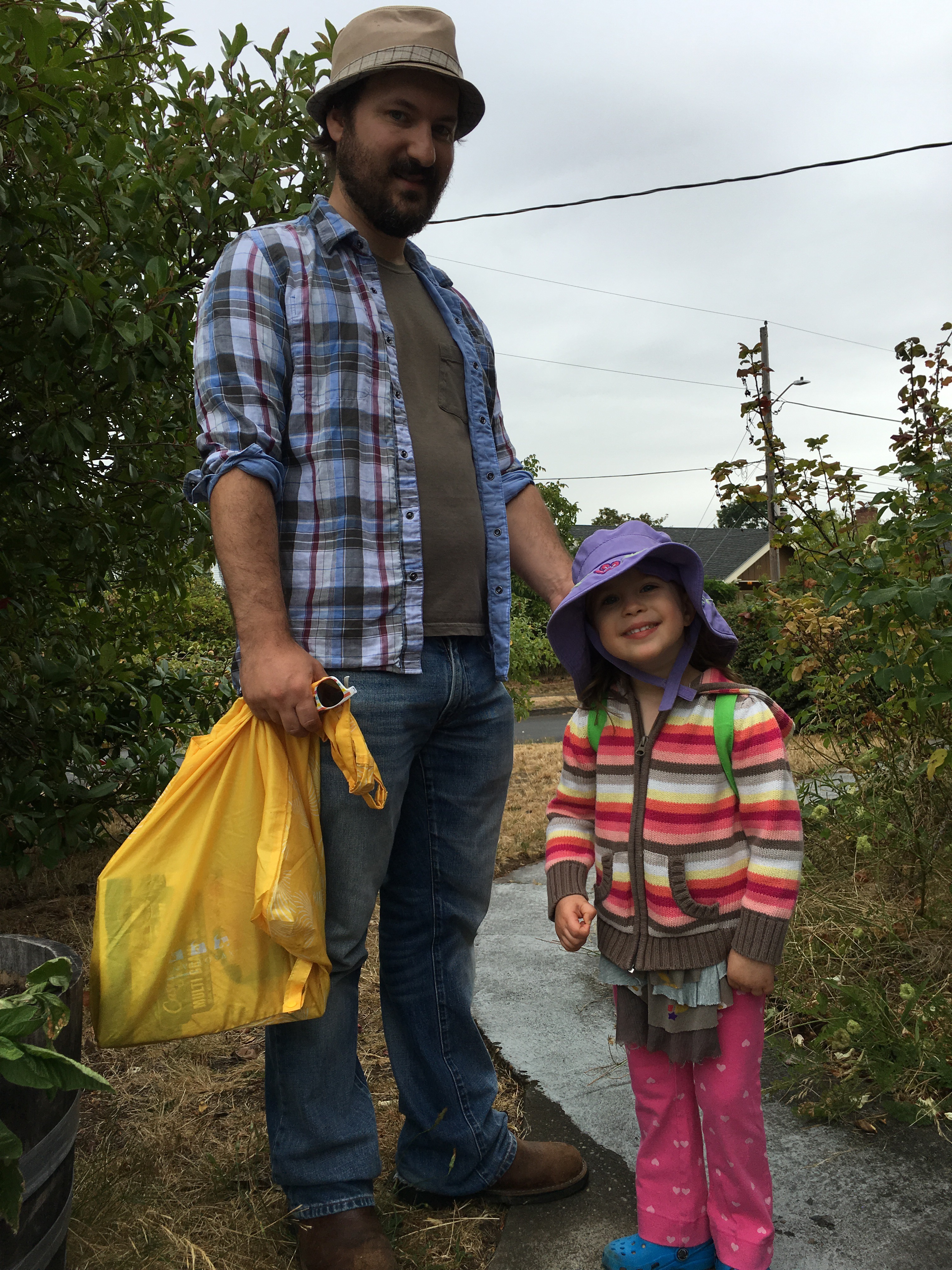 When we arrived, there were several other children and parents getting settled in too. Colette took off her shoes, hung up her sweater and hat, and then Mama helped her unload her backpack. She found the bin labeled with her name and put her extra clothes and slippers inside. She took her placemat and napkins to Mandy (one of the guides, which is what a teacher is called in Montessori schools), who helped her put them away with the other children’s placemats and napkins and then she waited her turn to wash her hands in the bathroom.

There was a lot of activity in the little schoolhouse as children were beginning to explore and say goodbyes to parents. Several little ones burst into tears at the thought of mom or dad leaving them there. Colette was quiet and observant, staying close to us. We wandered through the house, she contemplated going out to the backyard where Jeff (another guide) was exploring with some children, decided to stay in instead, and then met Jessica (the third guide). She watched as some of the children decided what to work on and Jessica helped them get started. Then Jessica suggested she say goodbye to Mama and Daddy so she could pick an activity.

Colette gave big monkey hugs, clinging tightly to our necks, hesitant to let go. She planted sweet little kisses on our cheeks. And then we walked toward the door to get our shoes and head home. As we turned to go, Colette wavered just a bit, tears welling up in her eyes. I heard her tell Jessica that she wanted Mama and Daddy to stay with her. Jessica acknowledged her feelings and offered her a hug, which Colette accepted. We waved and blew kisses and hugs from outside the window and Colette flashed a big smile, sending waves, hugs, and kisses back to us. “She will be just fine,” I assured myself.

Zakk and I headed home. It was slightly mistier now and we were quieter. I was thinking of some of the many, many moments that had led up to this point. Wondering how time can move so quickly and yet so slowly. Feeling anxious about how her first experience being away from a known and trusted adult would go for her. Feeling proud of my brave girl and knowing she will flourish in this new adventure. Feeling proud of us as parents for helping her get here. Feeling a little sad that she is growing up so quickly.

When I returned to pick her up, there were already several other parents leading their children down the steps and heading home, gathered inside the doorway collecting shoes and jackets, saying goodbyes and thank yous to the guides. I stood outside the window and watched Colette inside by herself for a few seconds. She didn’t seem concerned that she hadn’t seen her parents arrive yet. She was still exploring a bit, looking over the various shelves and tables at all their contents. She glanced up at the activity by the doorway and then over to the window and her face spread into a smile when she saw me. We waved to each other and she gently pushed her way through the grownups and out onto the porch to give me a bug hug. I asked her how it went. “Good,” she said smiling and then buried her face in my neck, squeezing me tightly.

On our walk home, she told me all kinds of tales about her morning. Most of them were pretend (“I went to a big blue mountain, all the way to the top, by myself!”), some were real (“I played with beads and put them on a string.”). She was exuberant and alternated between running and playfully dawdling. It was clear she had enjoyed her first day at school. I felt grateful and happy. And proud. So very proud. 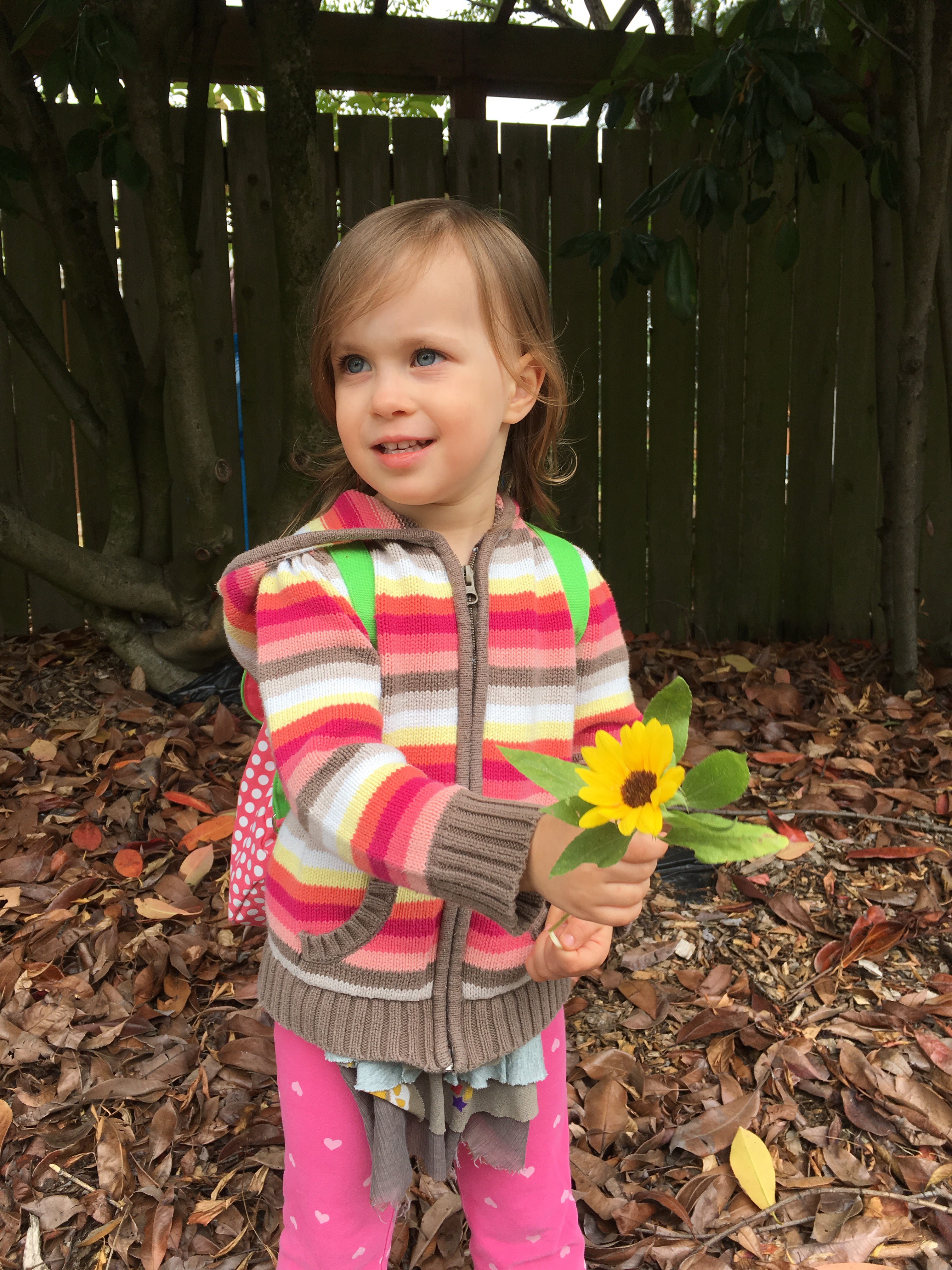